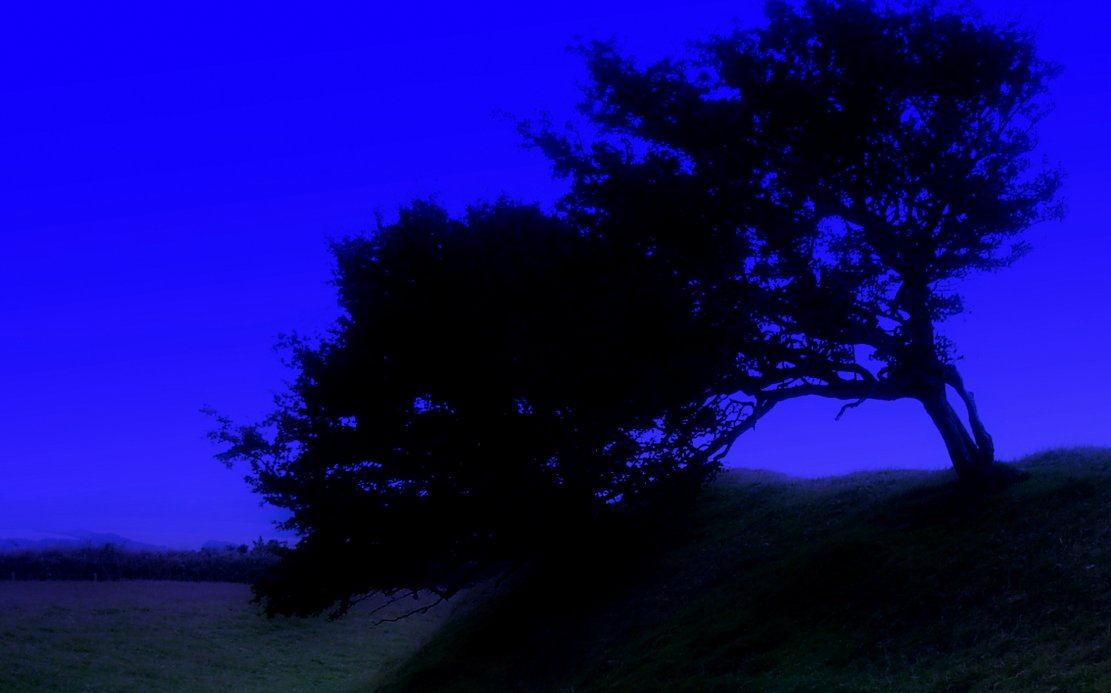 Anwen steps into the lee of the hillfort wall, and the ripping winds go still. In the sudden quiet, she hears the thud of picks and the ring of shovels. But it’s too late in the year to till, she thinks. Too hot, too dry to plant. What can they hope to reap from this parched ground?
“What one plants at daybreak,” says a voice cracked with age from deep in the shadows, “another harvests after dark.”
Anwen swings her bow into position, nocks an arrow, and takes aim. When her vision becomes accustomed to the gloom, she sees a grey-haired little lump of a woman tilt her head and look up from her fire with her one good eye.
“Sit, Anwen.” The woman pats the log she’s sitting on. “I’m called Murga. And we’ve little time.”
She knows that voice. Lowering her weapon, she draws nearer. Murga nods, and Anwen sits down beside her.
The seer takes Anwen’s hand and rubs her thumb over fingertips as black and calloused as her own.
“A hunter,” she muses with a glance at the bow. “Yet your ink stains and calluses tell me you etch.” She fixes that eye on Anwen. “You’ll do.”
Anwen looks around, studying Murga’s roundhouse with its roost, its grove, and its plot for growing herbs. It has fared no better than the others she has seen; the roost is silent, and the ground a mosaic.
I could have stayed on the cliffs to the west, she thinks, where the sea breeze still brings rain.
But her dreams had called her to Murga and guided her on her journey to this dying place.
A young woman holding a bundle in her arms hails Murga from across the barren fields. Murga nods to her and beckons.
“There is hunger here,” she whispers to Anwen, who already knows of the hunger. Everyone knows of the hunger in this blighted place outsiders now call Bury Down.
Murga looks over her shoulder and calls, “Bryluen!”
Cheeks flushed, a girl child emerges from the roundhouse carrying a square oak plank, its edges rounded with age and wear. With a nod, Murga takes it and jerks her head toward the door. Bryluen runs back inside the house, and Murga places the board in Anwen’s lap.
“This was passed to me from a mystic called by a dream.” Carved into the wood are the symbols and images Anwen has seen in her own dreams.
Bryluen returns with a tanned hide and lays it in the seer’s arms.
“The meanings of the symbols are etched in this.” Murga places the stiff hide on the board, then takes Anwen’s hand and lays it on top. “These writings call forth the power to return to the living world.” Murga’s eye goes to the arrows filling Anwen’s quiver. “And I’ve but this child to guard them when I’m gone.”
Now Anwen knows why she’s here.

A sound like the mewling of a cat causes Anwen and Murga to look up. The young woman from across the field stands near the fire. All bones and points, she cradles in her arms a blue-hued babe too weak to muster a proper cry. Bending close to Murga, she whispers in the seer’s ear.
Murga nods as she listens and then murmurs to Anwen, “Etch what you see here today.”
She gets to her feet and takes the elbow of the wasted young mother whose babe won’t see another dawn.
“Come, child.” Murga leads her to the grain bin and lifts the heavy lid; she scoops out a heaping cup and puts it in the young woman’s hand.
Movement from across the hillfort catches Anwen’s eye as a leather-aproned colossus comes out of the smithy and strides toward the seer’s hut, a sledge hammer swinging from his hand. Anwen looks to see if Murga has noticed, but the seer is steadying the hand of the young mother, for she is spilling her grain.
The blacksmith stops at the young mother’s back. He looks first into Murga’s face and then into the dusky face of the slack-mouthed babe, and he smiles. Leaning forward, he whispers into Murga’s ear. She turns her head and spits in his face.
The smith shouts, and villagers come from the direction of the burial grounds with shovels and picks. Pushing past Anwen, they circle the blacksmith and Murga, then drop their tools and take up a chant.
“Witch. Murderer.”
Anwen hands Bryluen the plank and the hide, then points to the grain bin.
“Take them, Bryluen. Hurry. Hide them in the grain. Then run.” She reaches for an arrow and nocks it while searching the crowd for the blacksmith. When he breaks from the mob, his long strides closing the distance between them, Anwen shuts one eye and draws back her arrow.
“Too slow, little girl.” Bony fingers grab her elbow and squeeze until the arrow falls from her hand. “You think it’s so easy to take down Colluen?” The man at her side, leathery, with sparse stubble over hollow cheeks, coughs out a laugh and releases Anwen’s elbow as the blacksmith wrests the bow from her hand and twists her arm behind her back, bending her wrist until she's sure it will break. She grits her teeth to keep from screaming.
“The other one.” Colluen juts his chin toward the grain bin, where Bryluen, clutching her master’s writings to her chest with one hand, struggles to lift the bin’s lid with the other. The old man catches her around the waist, carries her to the door of Murga’s hut, and sets her down before the towering smith. Snatching the writings from Bryluen's arms, Colluen shoves her and Anwen inside the hut and closes the door.
“Keep them there,” the blacksmith says.
Anwen hurls herself against the door, but it doesn't budge, and the man outside only laughs. Bryluen runs to the other side of the hut, stands on tiptoe, and looks out a window little larger than her head.
“They're taking her away, Anwen.” Her voice quavers. “Look.”
Anwen nudges her aside, bends down, and looks out.
The villagers have seized Murga. Still chanting Witch! Murderer! they drag her to the grove alongside her hut. Two men pin her against a sturdy rowan while others scatter branches and sticks at her feet. A woman comes running with a torch and lights it from the embers in the fire ring outside Murga’s hut.
Murga says something, and the crowd goes silent. Her cracking voice repeats the words, but Anwen cannot understand them.
A chant? Anwen frowns. A spell?
“She’s saying something, Bryluen. Something about … the sea? ‘Sea and …’ What is she saying? Listen.”
Bryluen cocks her head, and as Murga repeats the words, the child moves her lips along with her, murmuring, “Scientia nupta sapientia … Scientia nupta sapientia ...”
“I know those words.” Anwen closes her eyes and tries to summon the words Murga had spoken in her dreams. There’s more, Anwen is certain. She can hear the cadence, four more beats, but the final words elude her. Still, she knows this tongue. She’s heard it spoken by foreign traders and tin streamers. The language of the Romans.
She looks at Bryluen. “You know Latin?”
Staring into Anwen’s eyes, the child nods. “My master taught me.”
“And you know the rest of this chant.”
Bryluen tightens her lips and blinks.
She’s shaking. Anwen feels the chill wind blowing through the window; but Bryluen is standing alongside the wall, out of the cold. How much has Murga shown her of what’s to come?
“Murga taught you ...” Anwen’s voice, gentle and slow, coaxes the seer’s pupil.
“... all her secrets.” Bryluen exhales slowly, her gaze steady. “She told me I’m meant to teach you—” Bryluen frowns, then lifts her face and sniffs. “I smell smoke, Anwen. My master—” She forces herself between Anwen and the window.
“Stay back.” Anwen looks out again and puts up her hand to keep Bryluen from seeing her master at the stake, kindling piled at her feet and a hard-faced woman standing at her side holding a smoking torch.
The crowd parts, and Murga’s voice goes silent though her lips continue to move. Colluen approaches carrying beneath his arm the plank and hide that bear Murga’s writings. Bending down, he smiles at her and holds them out.
Her chant has saved her. Anwen’s hands fly to her throat as Murga struggles to free her arms from the men holding her fast to the rowan.
The blacksmith leans in close to Murga’s face.
“To hell with you, Witch.” Then he shouts over his shoulder. “Rope.”